The following is an excerpt from the "Sergio Leone and the Infield Fly Rule" blog post regarding an outdoor movie screening of "Drag Me to Hell" at Mission Tiki Drive-In. Read the full post about the outdoor cinema event, as well as the author's review on the film, here. It is my happy duty to report that the first SLIFR Night at the Drive-in, which took place this past Saturday night at the Mission Tiki Drive-in, was, in my humble estimation, a rousing success. Much of that success had to do with the feature entertainment being as perfect for a gathering under the outdoor movie screen as was Grindhouse over two years agomore about Drag Me to Hell in a moment. But I think it had a whole lot more to do with being part of a genial and enthusiastic crowd of people, some friends, some virtual friends and readers of this blog whom I had never occasion to meet before, and many folks who responded to the open invite just because an outdoor film sounded like fun. And because of each and every one that came out to celebrate the drive-in with us Saturday, that's exactly what it was. I arrived around 5:45, after discovering an annoying glitch in the directions I had provided to everyone that instructed drivers to turn down not the proper road to approach the theater from the back, but instead down a scary, dead-end alley from where there would seem to be, once you got down there, no safe or sure return. (Drag me to hell, indeed.) Fortunately, the folks who made the journey to Montclair that night were, to a driver, far smart enough to make the adjustment and figure out for themselves what I couldn't manage to convey. By 6:00 I was setting up tables and chairs next to the evening's very first arriving guest, the current president of the Phantom Coaches Hearse Club, Kerri and her husband (whose name I cannot recall, to my ultimate discredit), who parked next to my van and, as dusk approached, brought out their vintage Coleman oil-pump lantern (the kind that hisses as the fuel glides through its intricate machinery), which added immensely to the nighttime ambiance already brought to the darkening lot by their awesomely restored Caddy coffin wagon. 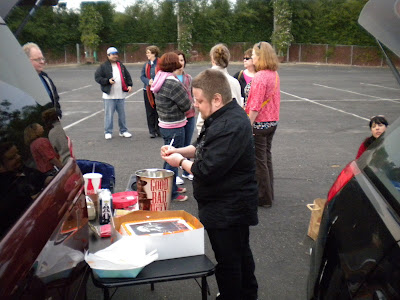 As we all began to coalesce around the general area near the front of the lot, get our spots laid out, migrate back and forth from there to the snack bar and back, and settle in as dusk and the movie grew nearer, I really began to appreciate the fact that so many peopleall in all, nearly 40came together to share this outdoor cinema experience, and I was very honored that it happened under my watch. It was a real thrill to look around and see a real party atmosphere taking shapeit really did provide a great lead-in for the high spirited movie we were about to see. Just before show time, we all gathered around the general area where most everyone was parked, with just enough time for me to hold a drawing for some Drag Me to Hell-Sam Raimi-related prizes. Sammi's husband David picked up a Three Stooges DVD set in a lunchbox container (the Stooges being an obvious influence on the style of slapstick that has been a linchpin of Raimi's visual style since Evil Dead 2); there were a couple of other cool DVDsquadruple features from Warner Bros. including a Hammer Dracula foursome that was highly coveted, and one of Raimi's amusing western pastiche The Quick and the Dead; a couple of very nice Drag Me to Hell one-sheets; and several one-of-a-kind, get вЂem while they're hot Sergio Leone and the Infield Fly Rule T-shirts! 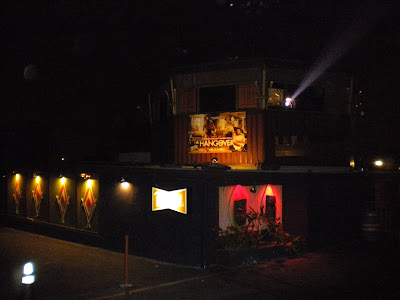 Once again, thanks so much to everybody who made going to Hell this past Saturday night such a blast. To those of you who wrote in wishing you could have been there, I hope this report brings a little of it home to you and will inspire you to somehow join us for the next one. (I've got a very good idea, but it all depends on whether or not there's a drive-in screen nearby that will be showing Black Dynamite.) Most of all, it's nice to know there are so many genuinely fine people who read this blog and would choose to share their Saturday evening with me for this event. I am honored and so glad that the memory of this fun night will thankfully last much longer than the actual event. (I even had a nightmare Saturday night after I got home, and it was almost as much fun as the movie!) Thanks for reading and coming out, everybody. In the immortal words of Sidney Poitier and Bill Cosby, let's do it again real soon! Official Blog: Sergio Leone and the Infield Fly Rule Source: http://sergioleoneifr.blogspot.com/2009/06/to-drive-in-hell-and-back.html.