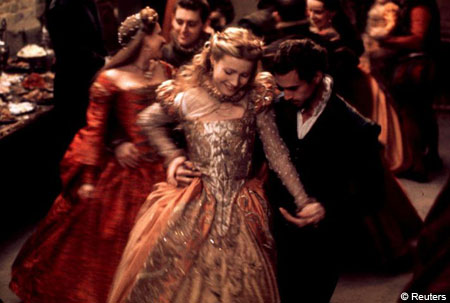 After last week's success of the Shakespeare Globe's production of A Winter's Tale, the second part of this year's Liverpool Shakespeare Festival is a three-day run of outdoor movies relating to the Bard. The choice of outdoor movies to be shown in the gardens of Liverpool Cathedral are, however, more pop-culture related than the stuffy BBC dramas that many were forced to watch at school. Kicking off proceedings tomorrow is Shakespeare In Love (15). Now ten years old, the romantic period-comedy starring Joseph Fiennes and Gwyneth Paltrow is far from historically accurate, but the modern revamp has its charms through madcap physical comedy and witty wordplay that befit a film about the great writer's love life. Al Pacino's Looking For Richard (12) is a far more sober offering on Friday. In the film, the actor looks at why the Bard is still relevant to today's society and offers a masterclass for actors on how to perform Richard III and the old texts. The short run is rounded off with William Shakespeare's Romeo + Juliet (12) on Saturday. Director Baz Luhrmann replaces swords with guns and adds a music video-editing style to the text. It brought the tale of the star-crossed lovers to the MTV generation and stands up well as one of the play's more energetic interpretations. A word of warning, though; if the weather continues as it has been lately, an umbrella might be in order for these outdoor movie screenings. Thurs, Aug 7 until Sat, Aug 9, Liverpool Cathedral, 20 Saint James Road, Liverpool, 9pm, ВЈ6, ВЈ4 Tel: 0151 727 1703. www. theliverpoolshakespearefestival.co.uk