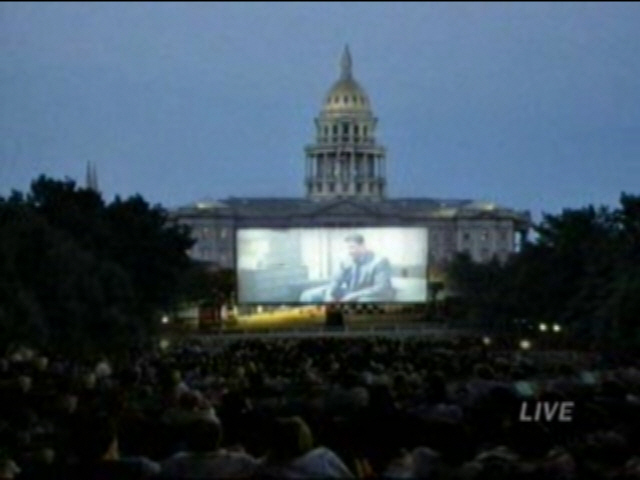 Denver has been chosen by U.S. OpenAir, LLC to be the first American host city for the cinema and lifestyle experience, which includes both film and food and wine pairings. But because Denver parks are usually free and open to the public, the City Council must vote tonight on whether to allow organizers to charge as much as $20 for tickets to the event.

The event is tentatively scheduled to open on July 14, pending City Council's decision.

A courtesy public hearing will be held tonight at 5:30 because of the controversial nature of the subject. Critics point to a similar argument used to fight a separate proposal by Parks and Recreation that would develop an admissions-based policy for many of the city's parks. Opponents say parks should remain free and open to the public at all times. Because a portion of Civic Center Park would be used for the admissions-based OpenAir film festival, opponents say Council should reject the request.

It is NOT a park purpose to place and operate movies in parks, restricting public access for an extended period and requiring a fee for entrance, writes David Felice, a delegate for the Inter-Neighborhood Cooperation, in an open letter to the City Council.

It appears Parks and Recreation is speaking of outdoor movies in parks as a fait accompli and seeking a вЂcourtesy' Public Hearing as a means of hastening its plans to inappropriately control taxpayer-funded property and conduct unlawful activities, continued Felice.

As is the argument against the admissions-based policy proposal, critics of the OpenAir festival also believe it would violate the City Charter by not asking voters to approve the contract.

The City Attorney's office says an admissions-based policy would not require a vote of the people.

The manager of Parks and Recreation has authority to grant permits to private individuals and groups to conduct events in city parks, and does so all the time, David Broadwell, assistant city attorney, told the Denver Daily News in an e-mail in December when asked about admissions-based policies. The Denver Charter does not require a vote of the people every time the manager grants a permit for an event in a park. The fact that a fee or admission price may be charged to participate in an event in a park does not change the analysis.

Meanwhile, Parks and Recreation is supporting the month-long outdoor film festival proposed for Civic Center Park because parks planners believe it would be a great way to activate the park. They point out that only a portion of the park would be used for the festival, leaving some of the park open to the general public. The city would also charge a seat tax for the event, with money generated being pumped back into parks and the general fund, said Jill McGranahan, spokeswoman for Denver Parks and Recreation.

We look at it as an opportunity to activate our parks in a positive way, she said. It's a great opportunity to raise funds, not only for the general fund, but for the park itself.

The festival aims to provide fine food and wine from local caterers along with the cinema experience. In addition to recent releases, the festival would also include short films by the Denver Film Society, as well as classic films and documentaries. Films would be shown on a giant screen hydraulically raised to stand three stories high with a 32-speaker surround sound system, according to OpenAir's Web Site.

The project has had great success in other countries, and organizers are hoping to find the same success in America. Denver was chosen as the inaugural American city because of its favorable climate, nearby entertainment and large downtown workforce.

The July 14th date to open the festival was chosen to coincide with the inaugural Denver Biennial of the Americas, an international cultural event opening July 1 in Denver celebrating the power of ingenuity and imagination.

McGranahan says Denver is a perfect host city for such an event.

It's right in line with the way we look at the city as a whole, she said. Denver is very progressive and one-of-a-kind and unique, and this would be the first American city where OpenAir would take place. We like the idea of Denver being known for that as well.