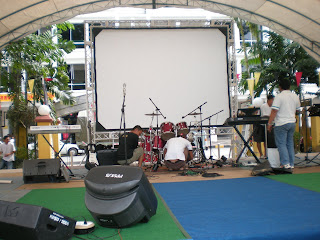 Heavy rains could not stop the people thronging the launch of the `Wayang Pacak` or free film show under Layar Bestari Programme of the State Information Department at Kapit Town Square on Monday evening. People from all walks of lives began to assemble at Kapit Town Square soon after the nightfall for a strategic position to view the Malaysian-produced Malay romantic film, `I`m Not Single` starring Farid Kamil and Lisa Surihani. The 5,000 capacity crowd had packed the Town Square like sardines although the free movie only began at 8.30pm. The overwhelming response touched Minister of Information Datuk Ahmad Shabery Cheek who launched the event at Kapit Town Square. He said it was the biggest crowd he had seen so far. The cheering fans could have been drawn by the presence of actor Farid and movie director David Teo who went on stage to say `Hello`. Heads of government department and senior officers also attended the function for a chance to meet Ahmad Shabery. Ahmad Shabery, who spoke briefly in Iban and Bahasa Malaysia, said he was happy to visit Kapit. The films shown are documentary films of the 1970s and 1980s. The highlight of the evening was the locally-produced film `I`m not single`. The Information Ministry had said on April 10 that it would be reviving the screening of free film shows this year. Ahmad Shabery said the show popular in the 1970s and 1980s, was affective in entertaining and imparting information to rural and sub-urban folk. Layar Bestari is not something new-in the olden days it was known as Wayang Pacak. The Information Department revived it as a means of communication in rural and sub-urban areas, to instill close family links and as a tool to disseminate government news. Layar Bestari is to become a national programme to feature local films and build close rapport between the Information Department and the rakyat. The department serves as the bridge between the government and the people, he added. I hope this programme, aided by modern equipment, will attract the audience. It is cost-effective and the message is education, he stressed. He said apart from screening movies that had elements of local politics and patriotism, the free shows would also feature development enjoyed by the people over the years. His ministry treats the film show as a tool for rural villagers to obtain valuable information on government policies. Ahmad Shabery explained that the free film show had been discontinued in the past as it could not compete with the increasing popularity of VCD, television and newspapers. He believed the free film shows could still be popular and his ministry would have to find innovative ways to attract people. He said the free film shows should be relevant in today`s society. Among those in his entourage were Datuk Abdullah Morad, Datuk Kamaruddin Siaraf, Assistant Minister in the Chief Minister`s Department (Economic Planning) Larry Sng, Kapit MP Alexander Nanta Linggi, Hulu Rajang MP Datuk Billy Abit Joo, Belaga assemblyman Liwan Lagang, political secretary to the Chief Minister, Daniel Jubang Kanyan, Walikota Kapit District Council Philimon Nuing, Sarawak Information Department director Resat Salleh, Sarawak Special Affairs Department (Jasa) director Jemat Lihi, Filem Negara director Ghazali Yaman and Kapit District Officer Simon Japut Tiok. Source: The Borneo Post (31/10/2008)